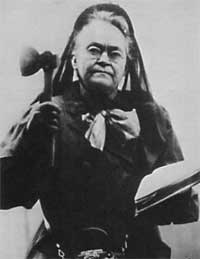 This is my response to Robert Kopecky’s excellent essay “Are Women (Spiritually) Superior To Men? A Call To Action!” which I recommend you read first.

First, let me thank Mr. Kopecky for courageously addressing a delicate question. I admire how he answered. My words below are not intended to take away from the many good points he made in his essay, but rather to identify some nuances I believe he overlooked, and to (I hope) offer some balance.

I had to refresh my understanding of the word “androgynous” before I was able to agree with Mr. Kopecky in principle that “The recipe for saving the world lies in this ‘Sacred Androgyny’” comprised of both male and female qualities fused in a mystical alchemy.

I confess my male ego prickled at the word “androgyny,” which conjures up visions of David Bowie in his Ziggy Stardust persona ~ not exactly the role model I am seeking.

But looking past my prickling is Mr. Kopecky’s wisdom, that indeed the fully balanced, seamless integration of a powerful female essence and a powerful male essence is the recipe for a New Earth.

But for the sake of wider acceptance of his point, by men especially, I submit “Sacred Synergy” may be a better phrase than “Sacred Androgyny,” as it avoids the Bowie connection and emphasizes a higher point:

That the whole of the divine, integrated being, the one Sophia yields when she “reunites with her male twin in a kind of sacred, balanced androgyny,” is more powerful than the sum of its parts male and female.

Then we become, as Sue Monk Kidd said in “The Dissident Daughter” ~ “male and female, both and neither” ~ a being vastly superior to the transgendered human.

In the Sacred Synergy, gender confusion is absent, and gender identity is honored. Male and female contribute equally. The key is the balance, an essential control in any good recipe, for too much of any one ingredient surely makes the dish go bad.

Mr. Kopecky has correctly identified perhaps the most egregious example of a male/female imbalance, which is how we have, and regrettably continue, to run roughshod over our planet. Elkhart Tolle said the same in “A New Earth”:

If the balance between male and female energies had not been destroyed on our planet, the ego’s growth would have been greatly curtailed. We would not have declared war on nature, and we would not be so completely alienated from our Being.

I agree we can, for the most part, lay this particular disaster at the feet of men and their mad quest for profit and domination. We will surely suffer from our ignorance of the Divine Feminine and our systematic stifling of her voice.

But let us not overlook examples of a reverse imbalance, when the feminine essence dominates and the male voice is stifled.

I offer two: The Volstead Act of 1919, commonly known as “The Prohibition,” and its ugly cousin, the ongoing “War on Drugs.” Both are cases of prohibition.

Legalized prohibitions are cultivated in an environment where the feminine desire for safety, nurturing and security, and their natural desire to protect humans from risky behavior is unchecked by the male’s greater tolerance for risk.

Prohibitions are a noble but misguided effort to “clean up” our society, to make it purer and better behaved ~ in a word, to make it more feminine.

The results are almost always tragic: organized crime, government corruption, the conversion of otherwise law-abiding citizens into criminals ( a.k.a. “scofflaws”), more people behind bars in the history of humanity (most of them poor, black men), and worst of all, untold numbers a vicious and heartbreaking murders, mostly of poor people of color.

Look no further than the Volstead Act for a case study of this particular type of disaster.

The Volstead Act, known formally as the National Prohibition Act, was enacted to carry out the intent of the Eighteenth Amendment, which in 1920 established prohibition in the United States.

Men cast the votes making it law, but it was women who largely (but not exclusively, any more than men are exclusively responsible for global warming) provided the muscle, through such organizations as the Anti-Saloon League, the Woman’s Christian Temperance Union, and the National American Woman Suffrage Association.

The Act is inextricably linked to the 19th Amendment giving women the right to vote nationwide: a right already granted by most states in 1919. Cowering under the emergence of a powerful women’s bloc in American politics, men lost their nerve and passed one of the stupidest laws in American history. It is a case of imbalance.

The modern “War on Drugs” is the Prohibition regurgitated, but with a bigger budget (much bigger), new actors, and more special effects. It is like the difference between James Cameron’s modern blockbuster “Titanic” and the ancient, grainy silent film “Saved from the Titanic.”

Today’s Prohibition is another case of laws that don’t work enforced by a multibillion-dollar industry of militarized police and for-profit prisons. We watch in horror as gun-toting officers run roughshod over justice without a care for who might video them ~ evidence of an emerging all-powerful police state with all-hearing eyes and ears.

It is an Orwellian nightmare of our own making, and it isn’t hard to connect the dots back to the root cause: irrational fears.

But this time, those fears are fanned by some with dubious intentions.

I am particularly suspicious of men who rashly rush in to “protect” us with the far-reaching resources of the male-dominated military-industrial complex.

For example, I hear of plans to build a wall prohibiting our neighbors to the south from entering the US, allegedly to keep out swarthy brown rapists and murderers who threaten our white women. Beyond this wall, the death and mayhem from our manufactured “War on Drugs” will continue, out of sight and out of mind, but only if one turns a blind eye.

To speak for those who live in Columbia, Guatemala, or Mexico, the actions of North Americans are nothing short of uncaring barbarism and hypocrisy. In no way do I see this as an example of enlightened female power.

In fact, prohibitions may very well be cases of women blindly playing into the hands of men bent on building yet another mechanism for control and dominance.

If true, both men and women have blood on their hands: One for their foolish naiveté and the other for their diabolical lust for power and control.

We can end the nightmare by restoring balance…by restoring the Sacred Synergy. That requires male action. We, men, must reject the notion that, as psychologist Michael Thompson aptly observed, “Boys are treated like defective girls.”

We are not defective.

We must reject the notion that we are personally responsible for eons of patriarchy and its abuses.

We must reject the notion that to be a complete man means becoming androgynous as if our male essence is evil.

We are not evil.

We must reject the notion that if we are to hope for a New Earth, our male voices must be muted or shouted down.

We will not be silenced.

We must reject the notion that we are spiritually inferior.

We men are, however, responsible for becoming the person David Deide describes in his book “The Way of the Superior Man.”

This newly evolved man is not a scared bully, posturing like some King Kong in charge of the universe. Nor is he a new age wimp, all spineless, smiley and starry-eyed.
He has embraced booth’s inner masculine and feminine, and he no longer holds on to either of them.
He doesn’t need to be right all the time, nor does he need to be always safe, cooperative, and sharing, like an androgynous Mr. Nice Guy.
He simply lives from his deepest core, fearlessly giving his gifts, feeling through the fleeting moment into the openness of existence, totally committed to magnifying love.

This is the man I want to be ~ a man of balance and integrity, one who gives his all to restoring the “Sacred Synergy,” and one who is fully equal (spiritually) to a woman.