How We Make Old People Suffer 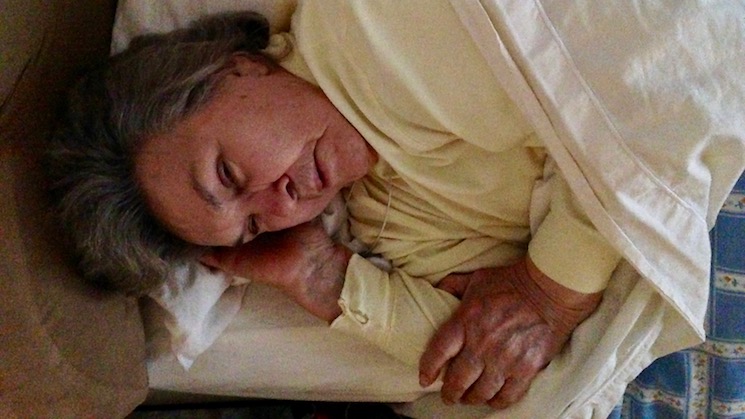 I often ponder what humankind will think of itself 1000 years from now, assuming we survive. What “flat earth” ideas will we find astonishing for their stupidity and short-sightedness, ideas we hold dear today as gospel truth? Racism is one, I’m pretty sure of that. How long it took us to deal with global warming will be another. But it’s “drugs and alcohol” that really baffles me.

Why is it taking so long to change our attitudes?

I am writing this at my 91-year-old Mom’s house. I speak to her by phone every day and visit her about once a month. I am literally watching her die. We don’t call it that…we call it “dementia” or simply “old age,” but the signs are unmistakable.

The woman is collapsing like a deflating balloon. A math major in college, she can no longer do simple subtraction in her head. She misspells my name and can’t remember things. Her voice is soft and weak. She sleeps more and eats less.
I am not alarmed by this. I accept it as part of the natural process. What I don’t accept is how we prohibit access to natural plant-based drugs that might bring her comfort and peace in this truly unique phase of her life.

At this point, what sense does it make to apply the same rules to her that we do to a person half her age? The fact is, it doesn’t. When a person is dying, our attitudes and laws need to shift gears, but they don’t.

We are stuck. Once we get unstuck, and one day we will, we will look back and realize how stupid we were.
When I was growing up, my Mom rarely drank. Now she has one or two glasses of wine a night.

“Good for her,” I say. Alcohol is a drug, but if it makes her feel better, why not? Last evening we sat on her patio looking over her unkempt but colorful garden, sipping wine and enjoying the warm air of late summer, and she told me the hardest part of growing old is her lack of energy and enthusiasm. “I want to be enthusiastic,” she said, “but I lack the energy.”

My heart breaks for her. This is a woman who, like her children, always had more interests than she could possibly get to in one lifetime. The evidence of that is scattered all throughout her eclectic home, which feels like the part art museum and part research lab.

Life was full of possibility, and there was nothing she couldn’t learn how to do but for knowledge, a willingness to try, and hard work. That ethic is in her blood, and now it has evaporated.

“If it gave you more energy, would you be willing to take a 7% solution of cocaine, the way Sherlock Holmes did?” I asked her.
“Oh no,” she said. “I couldn’t do that.”
“Why not?”
“I might become addicted.”
“And the problem with that would be?” I probed.

No answer. Her lifelong prejudice against “drugs and alcohol,” shaped in large part by the US Federal Government’s propaganda machine, prevents her from shifting her attitude toward “drugs.” Years from now we will know why we separated the two, and I suspect, as I believe most of you also suspect, that it has more to do with money than with public health.

We have an excellent case study on prohibition, that 13 year period of collective insanity and hypocrisy that turned ordinary citizens into “scofflaws” (criminals) and gave rise to incredible violence and a massive black market.

We should know from that period alone that prohibition doesn’t work and causes more harm than good. And let’s face it…we’re big-time hypocrites. We don’t apply the rules evenly. When John F. Kennedy, one of our most admired presidents, was being injected by “Dr. Feelgood” with the narcotic highball that alleviated JFK’s debilitating back pain, his brother Bobby voiced a concern about the stuff.

“I don’t care if it’s horse piss,” the president said. “It makes me feel better.”

Here we are, fifty years later, and my Mom, and millions of seniors like her, cannot have a taste of what relieved the suffering of the president of the United States. 1000 years from now, we’ll feel bad about that.