Why I Dig This Guy (the circled one) 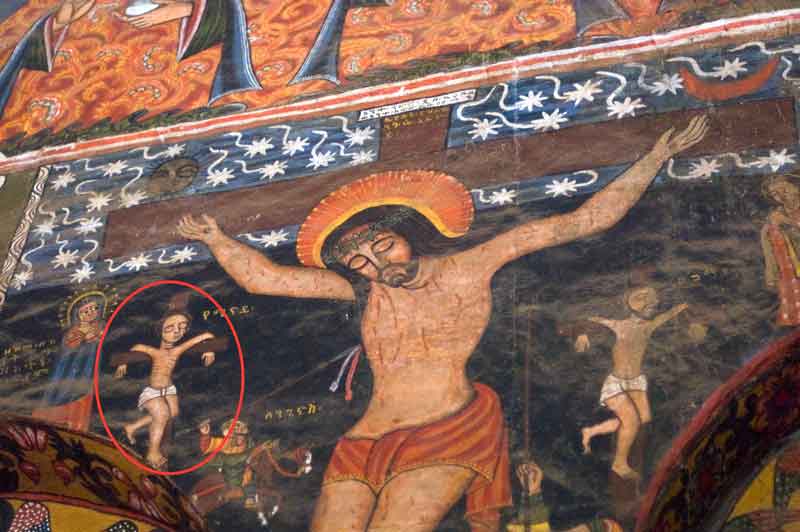 My favorite guy in the Bible is this guy ~ the one to whom the crucified Jesus said: “Truly I tell you, today you will be with me in paradise.”

Jesus’ promise, as you may recall, was made after the man said: “Jesus, remember me when you come into your kingdom.”

A free ticket to paradise, guaranteed by none other than Jesus Christ.

No confessions of sin.
No prayers.
No baptism.
No church membership.
Not even repentance.

I like that we know almost nothing about this guy…not his profession, his age, race, party affiliation, marital status, or alleged crime. Hell, we don’t even know his name. He was the backup singer, twenty feet from stardom, almost invisible next to the central rock star. The little guy.

Note I said we know “almost nothing,” because we do know two things about him.

One is that the Roman Empire saw it fit to put the man to death. Maybe he was guilty of something or maybe, like Jesus, he wasn’t.

We just don’t know. And you know what?

If it did, his crime would be recorded. But it isn’t, and there is a lesson in that. “Love keeps no record of wrongs,” said the Apostle Paul. The idea that some crimes (aka “sin”) are worse than others in God’s eyes, an idea advanced by the Catholic church and by modern protestants like R.C. Sproul, doesn’t appear to have factored into Jesus’ decision to give grace.

He splashed grace around sloppily, almost without a care, whether it was deserved or not. Like a man sowing seed into the wind, Jesus cast his grace with wild abandon and let it fall everywhere, all over the worst and the best, the good soil and the bad. All over us. And thank God for that.

I reject the idea that God is weighing and recording my crimes and then dispensing grace in careful, measured amounts…dosing it out like a miser…more for some…less for others.

That’s what control freaks do in the economy of poverty, and if that describes God’s kingdom, then I’d rather live elsewhere.

Some say we are to “give grace to those who are looking for grace” and not to those who aren’t, but they are wrong. “Forgive them, Father, for they know not what they do,” said Jesus about the angry mob that was killing him.

They didn’t deserve grace. No one does.

But we get it anyway.

So go take a bath in God’s grace. There is plenty of it. She is not the miser some make Him out to be.

The second thing we know about the circled man is that he was about to die. He wasn’t going to get a second chance to live the “right” kind of life, whatever that is. It was over.

There would be no further chances to score favors with God, an absurd idea that the book of Job invalidates, but that refuses to die. But with absolutely nothing to go on but his one simple request, barely an expression of faith, Jesus extended grace.

So what does this mean?

That is why I am against the death penalty and do not understand why more Bible thumpers don’t feel the same. It is never too late for a change of heart, no matter how “bad” we may deem a person.

In God’s economy, a person is still worth something, nay more than that, he or she is worth…everything. So this guy ~ this nameless soon-to-be-dead guy who the world considered a worthless throwaway ~ why that guy is me, and maybe you too.

So the next time you feel discouraged or worthless, remember this guy…the one with no name.

You are every ounce as valuable as he is, and if you ask for it, you too shall be this day in paradise. Maybe even today.