A Path to Your Own Treasure 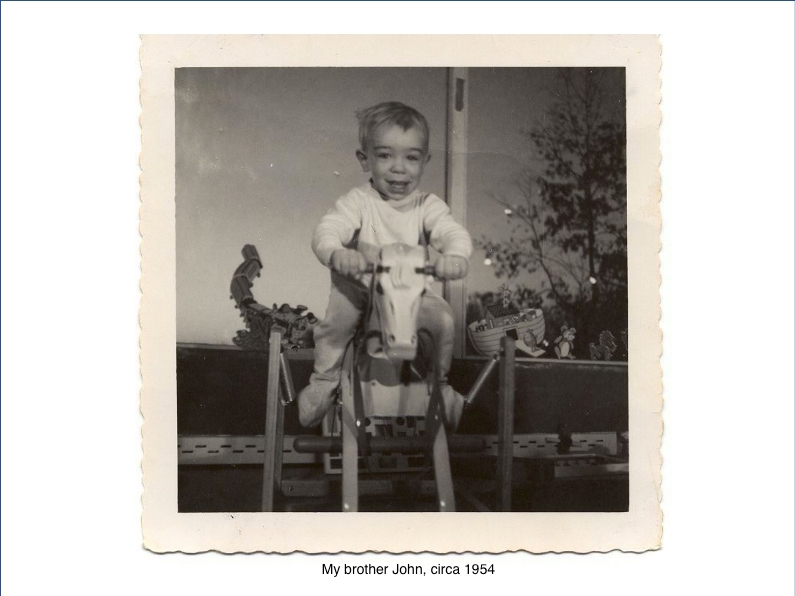 A Path to Your Own Treasure: Why I Became Interested in Death

A few years ago I interviewed Melissa Barber from The Death with Dignity National Center, an organization that advocates for the rights of terminally ill people to die on their own terms. During the production of the show, which you’ll find here, the Center asked me to write an explanation of how and why I decided to start a podcast about death.

At the time, I gave a rather pragmatic answer, which is reposted below for your convenience. While the answer is still valid, it only tells part of the story. Missing is the heart ~ the tragedy of losing my brother John, the missed opportunity, and the hope of the future ~ which I attempt to explain in this more emotional post about John, and this six minute film entitled “Why?”

If you are looking for a short answer to the question from me, you won’t find it. Coming to terms with death is not an easy process. It takes time…years even…and hard work. There are no shortcuts,…no 142 character tweets with the answer. There are layers upon layers to unfold, and in my story, the final chapter has not yet been written.

These writings and films open a window onto my personal journey. My hope is that by glimpsing through it you will find a blessing, and perhaps, a path to your own treasure.

The cave you fear to enter holds the treasure you seek.”

The last time I saw my brother was on a boat in the middle of the Severn River near Annapolis, Maryland. It was summer, and the family had gathered to spread his ashes. John died in April 1992 at age 39, just three weeks after the death of my father. It was a hard year.

It was then I began thinking more deeply about death, and as a bona fide geek, how technology might enhance ways to tell the stories of the dead. My father’s life ~ 64 years of adventure, living overseas, fighting wars, and raising six children ~ was reduced on his burial plaque to the infamous hyphen found between the date of birth and death.

My brother’s life is even less memorialized, as there is no marker to him of any kind, and rarely a mention on his birthday or death day. Maybe it is just too much for us to bear, especially my nearly 90+ year old mother, who grieves his loss more than the rest of us combined. We are, as are so many others, practicing our own form of death denial. So as the Severn River swallowed up the last of my brother’s physical presence, an idea was born.

As a geek, I imagined using technology to create something I called a “talking headstone,” which would use multimedia to tell the stories of the dead. The living could point at a “memorial”, which might be in the middle of a river, and ask, “Who’s there?” Then a short audio/visual presentation would play, conveying the dead person’s stories and a celebration of their life.

The talking headstone would expand the hyphen and make it come alive! But in 1992, the technology to make such a headstone did not exist, so I put the idea away for nearly two decades.

Years later, when I finally began “shopping” my idea among funeral directors, I learned something about their culture ~ they were staunchly resistant to change and hostile to new ideas. I immediately recognized the culture, for I worked for IBM at a time when they too stubbornly fought inevitable agents of change, like the personal computer, with such ferocity that the company nearly collapsed.

This tendency for a mainstream industry to resist changes evoked by disruptive, new ideas is brilliantly described in the book “The Innovators Dilemma” by Harvard Professor Clayton Christensen.

From Christiansen’s book, and from my personal experience with IBM, I knew that the mainstream funeral services industry, with its legacy of digging holes and carving in stone, would never accept my high-tech invention.

The future of the talking headstone lay elsewhere, with the rogues, the rebels, the dreamers, and those willing to challenge the entrenched paradigms of modern death practices. They are the ones who, as the Japanese wisely advise, “ask why five times,” and they are among the very people I now seek as guests for my new Dance to Death Afterlife podcast.

The fear of death and the subsequent denial of death is pervasive in the United States, and it is unhealthy. Together we have an opportunity to change that, and if we follow the irrevocable pattern Professor Christensen traces back to the beginning of human history, that change will come from outside the mainstream. It starts with a vision.

I believe that by taking an unflinching look at death, a natural and unavoidable process, we are better able to accept it, plan for a beautiful one, and most importantly, embrace every precious moment of life as a miraculous gift to be savored and cherished.

Others smarter and more talented than I have gone on to build the talking headstone, and I am excited for them. My purpose now, as creator and host of the podcast, is to shine a light on their accomplishments (and all other facets of death, including those from the mainstream) so that together we can change our world a bit for the better, overcome our fears, and enjoy a fuller, more abundant life…for as long as it lasts.

I want my listeners to be well informed and in control of their own experiences, as much as they can be. For if we don’t design our lives, and our encounters with death, then someone else will design those experiences for us, and it may not be what we truly want.

Did my brother John even want to be cremated? I don’t know. No one ever asked him.