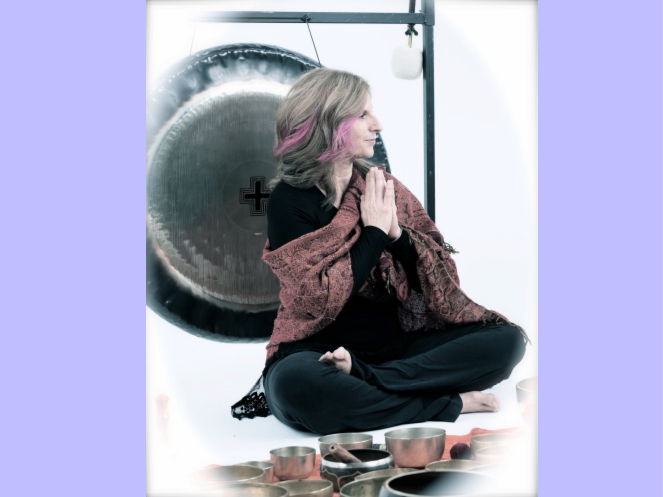 Sound therapist Pati Pellerito uses handcrafted instruments to nourish your neurological system and shift you into a dream-like space, allowing you to release and surrender. On this show you’ll hear Pati play the instruments, including over 20 Tibetan bowls and the rare “planet gong” made in Germany.

So sit back, relax, and enjoy a flight on my Blue Skyways.

I am back from the 6th Annual Afterlife and Awareness Conference where I had the honor of being the Master of Ceremonies. I met so many amazing people and learned new things about death and near death experiences (NDE) that really blew my mind. My creative juices were flowing, and one of my fellow brainstormers was Pati Pellerito of Healing Gongs.

Sound therapy is an effective and proven modality that uses vibrational sound to help reduce pain and stress, ease tension, and create a sense of peace and well being. Pati is a skilled sound therapist who uses beautifully handcrafted instruments to nourish your neurological system and shift you into a dream-like space, allowing you to release and surrender more deeply.

On this show you’ll hear Pati play the instruments, which include over 20 Tibetan bowls and her latest acquisition — a “planet gong” made in Germany. We also brainstorm on how to design a “death room” that offers comfort to the dying, in the same way “birthing rooms” offer comfort to mother and child. That’s an idea I had in the bathtub and describe in more detail here. Please don’t miss my invitation to record the wildest, weirdest, most fun, craziest, most unusual, non-pornographic experience you’ve ever had between the hours of 2 AM and 6 AM. You’ll find that here.

I have to apologize for the quality of my voice on this show. I was using a handheld mic and I was simply overloading the circuits. I hope that won’t stop you from giving me a good rating on iTunes! If you haven’t done so already, it would be a great help to me. Instructions for how to do that are found here, and thanks in advance!

The good news is that Pati sounds great, as do her instruments. Thanks for tuning in, and I’ll see you on the other side.